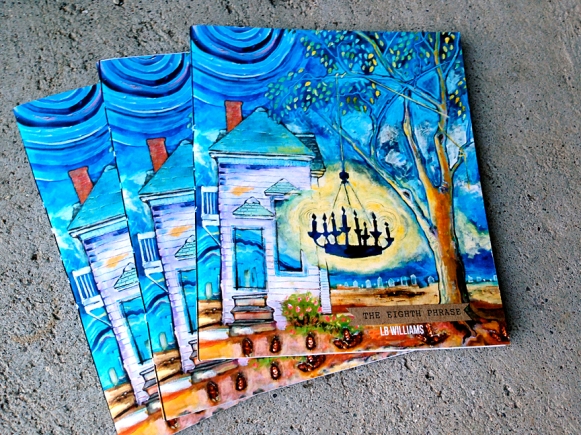 The Eighth Phrase (LB Williams) is a chapbook of poetry exploring New York as it existed decades ago. It takes a look at the streets of Queens and other areas, the New York Public Library, revels in the sunken fog outside yellowing windows, the messy bustle of a city teeming with joy, bikes, attic windows, high heels, lusty sunlight, and plastic fruit. It may seem a strange list of items to string together, but this chapbook does it beautifully, painting a portrait of child-life and a sense of place so vivid that you can almost taste the ice cream and night air. Available via Wicked Little Heart‘s Etsy Shop. | $7

An excerpt from another poem, number 4, “Unreal City:”

And below is one more sample from the chapbook, an excerpt of poem 14:

A few weeks before, he told me, I’m not afraid to die.
I was in World War II, you know what they said then.
If the bullet had your name on it, it was your time to go.
My father filled up the entire coffin. 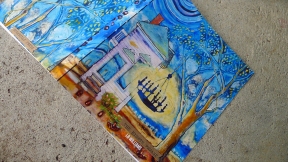 This chapbook measures about 5.25 x 5 inches. It features a painting by Angie Reed Garner as cover art (“Homes for the Displaced,” mixed media, 24 x 48 inches). The cover is produced via inkjet on professional matte photo paper. Each book is handbound, trimmed, and features a hand-cut title flag typed old school style.

What others are saying about The Eighth Phrase:

L.B. Williams’ poems are full of the delightful particulars of life. The Eighth Phrase is a lovely meditative sequence of scenes: melancholy at the core, and precise in detail and melody. —Lisa Jarnot

L.B.WILLIAMS is the author of the memoir Letters to Virginia Woolf (Hamilton Books, 2005), letterstovirginiawoolf.com. She wrote the critical study The Artist as Outsider in the Novels of Toni Morrison and Virginia Woolf (Greenwood Press, 2000). Her poetry has appeared in such publications as Washington Square, The Mom Egg, Sunrise from Blue Thunder (A Pirene’s Fountain Anthology) and For She is the Tree of Life: Grandmothers Through the Eyes of Women Writers. She has also published a poetry chapbook, Sky Studies, (Finishing Line Press Fall, 2014). She is Professor of Literature at Ramapo College of New Jersey.