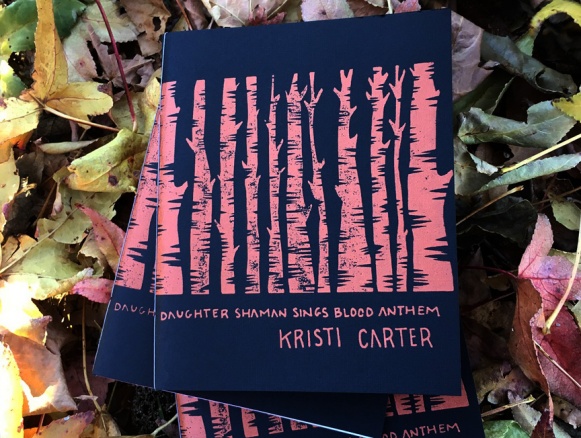 Carter’s work investigates the intersection of intergenerational trauma, survival, feminism, and power. Body-heavy and image-rich, these poems evoke a landscape of the scars and blood we carry with us, all the things that make up our lineage of memory and modes of recovery/survival/learning. It’s an intensely intimate series of poems about the claiming and finding of voice, body, and agency. “And ever since I anchored myself to the ground / and split off from myself, from the cracked husk / of girlhood finished, I return replenished. /  I return, to burn. / I return, with the wound / like a medal—in its gleam, how it sings.” (Porkbelly Press, 2017) » available in our shop

MY MOTHER IS CERTAIN

a man will cut me,
so she takes off my skin.
Says, Get the mop:
you were born to bleed.

All night, I swirl the limp yarns
across my shadow. Not allowed
to stand in place.

With my pelt tight on her body
my mother sleeps while the mop drags
behind my footprints like a beaten dog.

In the kitchen, the vinyl floor
squeaks into a shine. Reflects

the moon as it shrinks behind a cloud.
With the mop, I erase. Fact:

my daughter will be cut.
May scars, not blood, map her way home.

Kristi Carter is a PhD student in Creative Writing–Poetry with a specialization in Women’s and Gender Studies at University of Nebraska Lincoln. Her poems have appeared in publications including So to Speak, poemmemoirstory, CALYX, Hawaii Review, and Nimrod. Her work examines of the intersection of gender and intergenerational trauma in 20th Century poetics. She holds an MFA from Oklahoma State University.

about the cover & cover artist

The cover is made from two printmaking processes: a hand-carved linoleum block was first printed on tissue. Several prints were cut up and lined up when dry, exposed with photo emulsion on a screen for printing, then pulled by hand with metallic copper ink on 80# black linen-texture stock. Each book is hand-trimmed, numbered, and sewn with heavy thread. The first edition is 50. The book will be released in numbered editions of 50 for the life of its run.

books from other presses